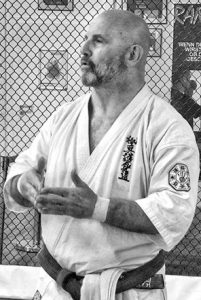 Hanshi Marc has been training in martial arts for over forty years. He began training in Wadoryu karate in 1973 in Pembroke, Wales and was twice junior Welsh Champion. He has fought in Knockdown Karate and represented his country fighting all over the world, including Russia, Denmark, Sweden, Spain and Greece. In the early 90s, he was the first to introduce Ashihara karate ‘The Fighting Karate’ to Scotland. In 1993 he met Kaicho Bluming and his Kyokushin Budokai system and at last Hanshi found the complete karate system he had been looking for. He has been a direct student of Kaicho since then. Hanshi specialises in Goshin (self defence) karate.

In 2019 he won the UK Hall of Fame Instructors Award for his dedication to martial arts.