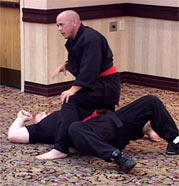 Jodoryu consists of a number of central areas that when combined, make for a highly effective combative, self-defense system: Ryukyu Kempo Using the Grandmaster Dillman’s Method of Pressure Point fighting and grappling, Ryukyu Kempo encompasses Okinawin arts as it should be. It utilizes the knowledge of Chinese Acupuncture to defend from attacks by either simple pain compliance all the way to dim mak (death touch). Small Circle Jujitsu Grandmaster Wally Jay’s adaptation to Japanese Jujitsu in successful efforts to simplify and make more effective the art of Jujitsu utilizing small circles w/in attacks.

Disharmonic Emotion Method (DEM) Professor Frazer’s study of emotions and the effect of it on the body in a fight situation. Taking these emotions and learning how to use them to your advantage in fight takes martial arts to new levels. Kiaido Song Park’s study of body energy, sound, and the effects it has on the body. Not only do these methods make for an effective system but as well as the 30+ years of experience in a range of styles: Brazilian, Japanese, and American or blended Jujitsu styles, Kyusho Jitsu, Kiai Jitsu, Ryukyu Kempo Tomari-te Karate, Modern Arnis, Wei Kuen Do Gung Fu, Tae Kyon, Small Circle Jujitsu™, Zan-shin Ryu Jujutsu, Tae Kwon Do, Hapkido, & Aikido.

“If you train with me directly and are not a cage fighter in training, you also know that our only real objective is maiming and killing the bad guy. Most other style focus on minimal damage to the opponent as one of the primary philosophical principles. If a student has that as a part of their belief system, then it is okay and they can water it down, just as a person who is taught to use a gun can shoot someone in the head or just wing them. I just feel personally that if I need to fire the gun in the first place it should be a well placed shot aimed toward ultimate incapacitation. If I don’t need to do that, I don’t need to fire at all.” Prof T.A. Frazer 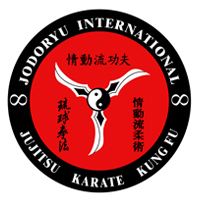