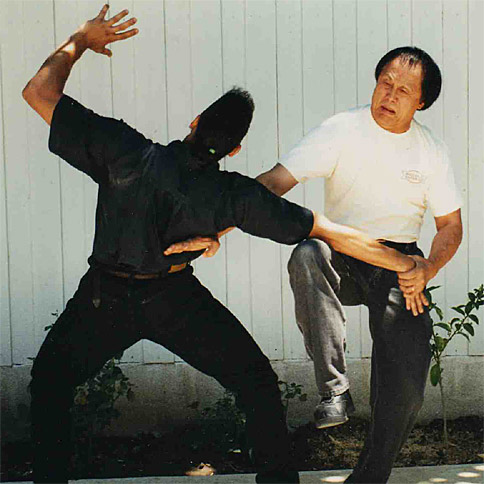 The term WEI KUEN DO is a combination of words from the Chinese language. WEI means integrated or assimilated, KUEN means fist and DO means way. Wei Kuen Do therefore means, The Way of the Integrated or Assimilated Fist. At bes,t WKD is a description given to an approach to combat. It is not a system nor a style. It merely describes a process, an evolutionary process that is always changing and in the state of transition. When one has reached harmony between body, mind, emotion and spirit, he has reached a peak in development. Combat is self-expression. As such, the physical is merely a vehicle for the feelings within. The total integration of these various segments or ourselves must be emphasized if we are to transcend the boundary of limitation.

The essence of WKD is that all things are good. It embodies all facets of life, combat, business, religion, etc. Its basic theory is that anything that will help one to accomplish a set goal is good. WKD is not concerned with styles, systems or ethnic roots. The key concern is with results and freedom of expression. In order to transcend the boundaries of limitation one must overcome prejudices and see the totality of life objectively and embrace what is useful to us. Nothing is absolutely good or absolutely bad. All things in its right place and time are good. In the matter of combat, all techniques are good at a certain place and time. There is a time when a punch is more practical than a kick and a throw is more effective than a punch, and vice versa. Effectiveness is determined by appropriateness. The whole emphasis in WKD & Kyusho Combatives is physical development, mental disciple, emotional expression and spiritual enlightment. The cultivation of these four areas will assure one of complete growth.

Wei Kuen Do & Kyusho Combatives development is divided into four stages. Each stage is designed to take the practitioner a step further toward spontaneous expression. The four stages are: 1) PHYSICAL STAGE, 2) MENTAL STAGE, 3) EMOTIONAL STAGE and 4) SPIRITUAL STAGE. As a person grows older he will depend less on the physical but depend on the spiritual. When one has fully matured in each stage, he will have the perception to see much more. Some call it psychic but it is merely the sharpening of ones total faculty until he is in tune with his opponent and the universe.

1) PHYSICAL STAGE: The Physical Stage includes the development of the body. What a finely tuned racecar is to a driver, so is a well conditioned body to a martial artist. During this phase of the training emphasis will be placed on Development of the Tools, such as body hardening, punches, kicks, throws, grappling plus strength, agility, speed and stamina.

2) MENTAL STAGE: Without mental discipline all the technical skills in the world would be useless. The ability to concentrate and focus on the job and hand will determine failure and success on combat. Emphasis at this stage will be placed on the Development of Awareness, Stress Training and Refining the Tools. Meditation will be emphasized to develop a more relaxed posture in the midst of a stressful situation. Timing and speed are determined by ones mental response and awareness. When one is relaxed and able to concentrate, his reflexes are more responsive to the opponent’s moves and he is able to intercept, dissolve and counter with ease.

3) EMOTIONAL STAGE: Combat is the ability to express oneself through the physical tools. The ability to express is greatly influenced by ones emotional state. For instance, fear can be one of the most impeding causes of free expression. Fear can lead to shyness, over-aggressiveness, lack of confidence and many character disorders. Total commitment to a technique is determined by how much confidence one has in himself and his ability. In this stage focus will be giving to Stress Training, Refining the Tools and Disharmonic Emotional Theory.

4) SPIRITUAL STAGE: When we speak of the Spiritual Stage we are not speaking about religion necessarily. We are talking about a force that exist in the universe greater than man and machines. Harmonizing our life with this force adds strength to whatever we do. It adds meaning to our successes and wisdom to our failures. In essence it is the source of power. In this stage the focus is on Dissolving the Tools.

1) FORM: Form is the way you carry yourself. It is grace in movement. A good runner cannot look jerky and uncoordinated. They must have form to get the best time. The bowler must have good form before releasing the ball otherwise the ball would roll into the gutter. In every sport an athlete must have grace and good form.

2) FLOW: You must have fluidity of movement. If the techniques are choppy and without form, the opponent will easily counter. In the art of combat, the focus is on flow; when a practitioner executes a punch, instinctively you should feel the need to flow from one angle to the next without thinking. Every technique delivered should give the practitioner an emotional direction.

3) FOOTWORK: Footwork is not a separate component from Form and Flow; it is connected to the former two components. When emotional structure responds to an attack; the footwork goes into play automatically. One way to develop a “hit without getting hit” mind-set is to perfect your Footwork. No matter how deadly your techniques are, without proper Footwork, your weapons will “die on the vine.”

4) FEELING: Feeling or sensitivity is not confined just to physical contact; but rather it is the emotional connection between you and your opponent. The moment your opponent moves on you, you instinctively know where he is. This will enable you to render his attack harmless or allow you to abort his attack with a counterattack before he can make his initial move.

One of the keys to perfecting the 4 F’s is awareness and consciousness as you repeat the various physical movements related to your repertoire of techniques. The key to perfection is repetition. Repetition enables a practitioner to deepen the art. Far too many practitioners of martial arts move from one techniques to the next skimming the surface but never reaching spiritual depth. In observing great fighters I have noticed one common denominator; the most effective techniques are the simple basic moves that they had practiced over and over for many years until it became rooted. Through years of repetitious practice they had perfected the 4 F’s.

The outcome of a life and death situation on the streets is often determined not by techniques as much as it is determined by the defenders response to the attacker and his attack. Many of the techniques taught in martial arts studios are ineffective in an unexpected attack. In order to save life and limb on the street, the defender must be spontaneous in his reaction. It is what Bruce Lee referred to as, “A voice and an echo.” There is no time to deliberate and to decide which technique to use. When you are grounded and rooted in the Zen Zone, the response to every situation must be “like a voice and an echo.” Proficiency is never based on the quantity of techniques as much as it is based on the ability to express a given technique without deliberation and hesitation.

The techniques you will be taught are only a physical guideline on how you can deal with a specific attack. The ultimate goal is to develop a spontaneous response to every life-threatening situation. Thus working from the Zen Zone is essential. Here we express the technique. In order to express the technique we must become the technique. Much like a professional actor must become the character if the character is to be believable. There is a difference between doing the techniques and being the technique. The purpose of WKD & Kyusho Combatives is to take the first step toward entering the Zen Zone. This training IS NOT “if he does this to me, I will do this to him.” Not at all! The deeper implication is to harmonize and blend into your opponents energy, thus neutralizing his attack and then follow with counterattacks. The key to being one with your opponent is to be spontaneously adaptable. It is my belief that all techniques are inadequate without the mental, emotional and spiritual dimension. The internal structure of a self-defense system is what makes even the most implausible technique work. While on the other hand, the flashy and good-looking techniques will fall flat without emotional content. In my own martial arts journey, I have heard scores of war stories about the trained martial artist getting the short end of a fight by a crude and less trained bar room brawler. Inevitable, the question is asked; “Why? He is a third degree black belt.” My answer is always the same. The man may have crude looking moves, but he operates from the Zen Zone. His awkwardness has emotional content. He is able to express his “haymaker” even though he might telegraph it from a mile away and make it work. The trained martial artist is accustomed to working with other trained partners. The street fighters fight out of instinct and bad intentions. Again we get back to the emotional, mental and spiritual content. After meeting Bruce Lee and training with him for over ten years; I am convinced that one must seek his own truth. A true martial artist cannot be effective by being a clone of his or her instructor.